Nintendo has brought joy to many since the year 1889. They started off producing handmade playing cards and have now evolved into the video games behemoth they are today. And whilst increasingly more games companies aim to nurture mental health awareness, equality and accessibility through their content, it seems Nintendo has been helping the population with mental health for quite a number of years.

When it first launched on the Nintendo DS in 2006, Dr Kawashima’s Brain Training flew off the shelves. It’s essentially a workout for the mind – a game that aims to help improve your brain age, which in turn helps with daily activities and memory skills. With health experts often suggesting we engage with tasks that help take our focus away from anxious thoughts, brain training games potentially provide that much needed mental release. In fact, a recent study found evidence that regular engagement with challenging online memory games can improve mental wellbeing in teens. Attention and emotion are apparently closely linked in the brain, so by improving attentional control through these games they were able to positively influence emotional functioning.

Wii Fit also proved massively popular when it first launched. Both avid gamers and families were flocking to the shops every time new stock became available. Wii Fit was designed to get people gaming and exercising at the same time, whether it was to lose weight or just have fun together. The potential benefit to mental health is obvious, when we know that exercise releases endorphins and therefore reduces the intensity of mental health issues for many. The games and activities on Wii Fit could also be a way to stimulate routine, particularly for those who are house-bound due to mental health reasons. 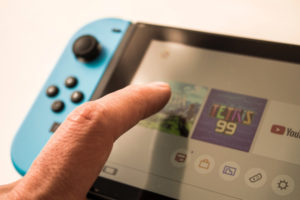 Then there’s Tetris. In a study by Molecular Psychiatry, they conducted an experiment in the UK with 71 patients who had just, within hours, witnessed or been involved in an incident involving psychological trauma. The patients were told to do a task such as watching TV, texting, reading or playing Tetris. 37 of the patients played Tetris for 20 minutes and the study showed that in doing so, the game offered a low-intensity therapy that could substantially reduce “intrusive memories” after trauma. Like brain training games, the focused engagement with Tetris was able to relieve stress and reduce anxiety and panic attacks. The study also showed that video games use the part of the brain that focuses on the ‘now’, rather than the past or future, preventing the patients from dwelling on the negative memories.

Today, as we face the social challenges of the COVID-19 pandemic, the release of Animal Crossing: New Horizons on Nintendo Switch has proved to be an isolation antidote for many. Being able to connect with friends and family who are also playing the game from their living rooms eases the social distancing frustration. It’s also a haven of escapism, where you can share fruit with your neighbours or laze on a friend’s island. The possibilities are endless for creating, exploring and that all important relaxation.

It’s clear that Nintendo has done a lot for mental health, perhaps without always realising the positive and scientific outcomes their games were going to produce. They have become known for creativity and imaginative adventures, providing true escapism from the harsh realities that many are challenged with. We can’t wait to see what Nintendo has in store for the future.

Safe In Our World Teams up with Football Manager!

In this hyper-cute life simulator, you are the proud owner of a deserted island getaway package and are free to create, explore, and relax.  During the time we’ve spent with Animal Crossing: New Horizons, we’ve shared fruit with our neighbours,...