After first playing Deep, I had to sit down. In fact, that’s underselling it. After first playing Deep – a meditative virtual reality game controlled by breathing – I felt so relaxed, so totally and utterly chilled out, serene and warm and fuzzy inside, that I could’ve laid down and slept for a week. Right there, on the show floor of EGX Rezzed 2015, inside London’s bustling Tobacco Dock events venue, among its scores of busy revellers shuttling between blockbuster demo booths and food stalls selling gourmet burgers; drifting off to the rhythmic bleeps and bloops of the retro gallery’s chiptune soundtracks.

I didn’t, of course, but instead sat on a wooden bench opposite the room that housed Deep and other similarly unorthodox indie projects. As I gathered myself and my thoughts, I watched through the glass doors of the Leftfield Collection Hall with excitement as someone else strapped on the VR headset I’d worn moments before. I smiled a big daft smile as Owen Harris, the game’s mastermind and director, helped the would-be player slip into the breathing belt that wrapped around their chest. And I let out a little chuckle as I watched the player’s smile stretch wider and wider beneath the rim of the Oculus Rift VR headset strapped to their face and covering their eyes. This person was experiencing exactly what I had, and exactly what Harris had hoped players would at that video games expo seven years ago.

Using a virtual reality headset, headphones, and a custom-built self-calibrating belt that ties players’ real-world breathing patterns to how the in-game avatar navigates their gorgeous underwater surroundings, Deep creates a gamified version of diaphragmatic exercise. Creator Owen Harris first conceived the idea as a means of controlling his own anxiety, saying that while deep-breathing exercises have never cured his anxiety and sleeping issues outright, they have helped control them. Deep, in essence, recreates the process, which, on-screen, sees a reticle expand and contract in tandem with the player’s breathing – with the player character sinking or ascending with each inhale and exhale, as they float around a gorgeous underwater network of bright coral reefs and schools of tropical fish. It’s difficult to put into words how much better I felt after spending just 10 minutes with Deep at EGX Rezzed in 2015 – so much so, I slept like an absolute baby on the flight home to Glasgow later that evening. Since then, Deep as a concept and project has come a very long way. 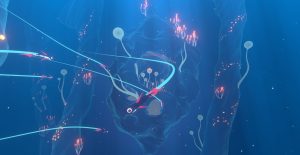 After spending a year touring Deep around similar video game events across the globe – as well as art exhibitions, museum showcases, and even the Tribeca Film Festival in New York City – Harris and the game’s art director, Niki Smit, partnered with Radboud University’s Games for Emotional and Mental Health lab. At its core, Deep has always been about soothing and relieving anxiety in its players, primarily by way of diaphragmatic breathing, but with professional researchers now on board, the efficacy and credibility of the project on a scientific level could finally, properly, be explored. Several published academic papers followed, proving that Deep indeed can help players to diminish anxiety, improve their mindset, outlook, sleep patterns, and belief in their own capabilities, among a host of other positive outcomes.

In early 2020, buoyed by all of the above and with a clear vision of where it wanted to be next, the team behind Deep was gearing up for a new edition of the game – a version Harris described as a “grand expression” of everything Deep had explored in the fields of art, science and health to that point. Built on top-end hardware, this was to be the definitive version of Deep, one which put “visual splendour above all else.” When the pandemic hit, however, Harris said he and his team’s worlds were brought into sharp focus, and while the thought of swimming in a vast and vibrant world remained undoubtedly appealing, Harris reckoned building the game exclusively for high-spec (and thus expensive) VR headsets was “self-indulgent, elitist and selfish”.

To this very end, on February 3, 2021, after a year of planning, iterating and reiterating, Harris announced Deep was coming to the Oculus Quest.

Fast forward five months from its Oculus Quest announcement, and Deep featured at the Cannes Film Festival’s Cannes XR, a tech-focused off-shoot that runs alongside the main event. As part of the Unity for Humanity showcase, the team behind Deep showed off how the game will operate on Quest, with the most obvious difference being: here, in order to track the player’s breathing – in lieu of the regular edition’s custom-made belt – the Quest’s hand controllers are positioned on the player’s chest, moving in and out with each breath. With shots of glowing coral reef, dark and mysterious caves, and beautifully expansive underwater sprawls, Deep as it will feature on Oculus Quest looks every bit as wonderful as the game I first played many moons ago at EGX Rezzed, and I can’t wait to see how it’s received by players on a wider scale than ever before.

Deep is still without a concrete launch date for Oculus Quest, but I’m certain it’ll be a hit for anyone keen to help alleviate anxiety, relax, work on mindfulness, or improve sleep. This is a game that started out as a pet project of one person, used exclusively as a means of switching off from the stresses and mundanities of everyday life, that grew and evolved, re-evaluated itself and its purpose, and is now on the cusp of being released to the masses.

As a video game critic, one thing I’ve always admired about the best, most profound and impactful games I’ve played over the years is their scope to stick with me. If I’m still thinking about a game one week, one month, or, if the game is good enough, one year into the future, then it’s likely a hit and well worth your time. I played Deep for 10 minutes seven years ago at a busy games event. I think that tells you all you need to know about how much of an impression it’s left – and I hope you take the time to let it make one on you too in the not so distant future.

Nicky Case is a Canadian indie developer whose free and readily accessible browser games challenge us to think differently on a range of sensitive subjects which can hugely impact our mental health. Coming Out Simulator is a semi-autobiographical text-based adventure...

Deep is a virtual reality meditative experience controlled by breathing. It allows players to navigate an underwater world, whilst controlling your movement and direction through deep breathing, aimed to reduce and relieve anxiety. Your breath is used to move you...

Journey, Anxiety And The Unavoidable Importance Of The “Walking Simulator” – by Lara Jackson

One of my favourite games of all time is thatgamecompany’s Journey. Originally released for PlayStation 3 back in 2012, Journey is a relatively short game in which you play as a cloaked figure traversing the desert. Your goal is to...